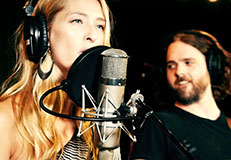 In conjunction with leading industry Producer (TBA), NBC's "The Voice", Yellow Dog Video, and Stinson Recording Studios, we are proud to announce The Recording Conservatory of Austin's 2016 Unsigned Artist Showcase! -Where the best artists in the country compete in a live recorded showcase for $4,000, 100 free hours of studio time, private auditions for some of the biggest talent discovery TV shows in the nation, and to be seen and heard by some of the most important music industry representatives in the country. Please fill out the form to Enter.


The top 4 finalists will perform a recorded showcase at Stinson Studios. These recorded 2 song performances will be ranked by fan views and judged by:

The first step is to register your band for the contest to enter the showcase. TRCoA will then choose 25 bands for the fan voting round. Only the four bands with the most votes will perform in the video recorded showcase at Stinson Studios, where judges and fan views will determine the winner!